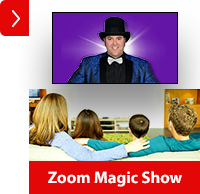 Andy is a World Record Holder who performs at Hollywood’s world-famous Magic Castle. He has made Magic for David Copperfield in Las Vegas and has performed Magic for the Village People. Andy is a member of the Academy of Magical Arts, a secret Magic society in Hollywood, California. Andy is proud to be the only Magician in the world with a Chimera twin, who is 30 years younger than him and lives in Brazil.

Andy takes great pride in delivering a superior Magic Show. Andy is like a Broadway show but better. If you have the pleasure of seeing him perform live, you are witnessing history in the making.

Andy is an award-winning public speaker and a Distinguished Toastmaster. Andy is a Scottish Lord. A Castle in Motherwell, Scotland, is named after his family. Andy travels worldwide doing Magic, including Bali, Singapore, Korea, Japan, and Europe.

Companies Andy has Worked with Andy and The Village People

Why I Chose Magic

My magic career began when I was two years old. My grandfather tapped me on the shoulder one day and said, "Hey Andy, I want to show you something. I…
Daria 0
Blog
July 21, 2022

When a magician finds out that Jeff McBride is my mentor, the first question they as me is, "what's it like working with Jeff McBride?".  Jeff is the biggest reason…
Daria 0
Blog
July 21, 2022

Success is defined in many different ways within the magic community. Some amateur magicians are hobbyists and do magic for fun to get the occasional paid gig, there are semi-pros…
Daria 0
Blog
July 21, 2022

How to Hire a Magician

Step one of hiring a magician is using Google to search for qualified magicians in your area. Certain factors go into seeing if a magician is qualified: their reviews and…
Daria 0

EXCELLENT Based on 61 reviews

Magic Eddy
Andy is an incredible Magician. I have seen him perform multiple times at the world famous Magic Castle. He always keeps his audiences on the edge of their seats. In addition to his amazing Magic he is also hilariously funny. His dedication to his clients and passion for Magic is unbelievable. I am so lucky to have him as my colleague.

Jamie The Magician
I have always enjoyed Andy's magic. Andy Is the type of entertainer that you want. No headaches and very professional. His magic is slick, stylish and unforgettable. if you haven't seen Andy perform, you're missing out.

43MVesper
"Amazing" is truly the only word to describe the type of experience Andy brings to you and your family with his virtual magic shows. He recently performed for our school's annual Fall Festival and was such a natural with our students. Andy's charm and humor pale only in comparison to the quality of his work. If you're looking for a new, fun, and interactive experience (especially to share with friends/family), you absolutely MUST book one of Amazing Andy's virtual magic shows!

Robert Baxt
This guy was great! Super fun and everyone loved him!

Crates McD
Andy is a consummate showman, with an outstanding flourish for detail and a true love for the art of prestidigitation! When you hire Andy, you're bringing on a professional who works with you every step of the way to cultivate the perfect experience for your special occasion. Andy's got great jokes, a terrific rapport with the audience, and some truly unique illusions that will leave EVERYONE guessing. Look no further: this is the magic act you've been looking for!

Adam Gertsacov
Andy is a good guy, and that shows up in his magic. His tricks are good, but what really impressed me about his show is his persona. As a family performer, Andy really makes everybody at the show feel comfortable and everybody leaves the show with a good feeling. I highly recommend him.

Andy Dalzell
Best Zoom Magician I have ever seen! Andy is an Amazing Zoom Magician. There is a reason why Samsung, Adam Cheyer, the Creator of Siri, and the Great Throwdini work with him. Hire him when you are looking for a Zoom Magic show.

Mary Martin
Amazing Entertainer. I've hired Andy 5 times and his Magic is always different and incredible. There is a reason why David Blaine and Penn & Teller consult with him. I'm looking forward to seeing him on March 3rd. He is an amazing talent. He is also a wonderful keynote speaker and motivational speaker.

Edward Nista
Coporate hired Andy Peters for the annual holiday party this year. His talent as a magician and all around entertainer made this year’s bash one to remember. If only we could keep this guy on retainer!